Playing Cards On The Titanic

"Striking the water was like a thousand knives being driven into one's body. The temperature was 28 degrees, four degrees below freezing." - Charles Lightoller, Titanic Second Officer


Much has been written over the past 100-plus years since the unsinkable sank – and some of it has been about people playing cards at the time Titanic hit the iceberg; and the playing cards themselves that have been associated with this disaster.

The Titanic was the newly launched pride of The Oceanic Steam Navigation Company. Also known as White Star Line of Boston Packets, it was more commonly known as just White Star Line. It was a prominent British shipping company, today most famous for their innovative vessel Oceanic of 1870, and their Olympic class ocean liners, including the ill fated RMS Titanic.

In that era, auction bridge was a very popular game, especially with the class of people that would be traveling on the maiden voyage of a fantastic new ocean liner! 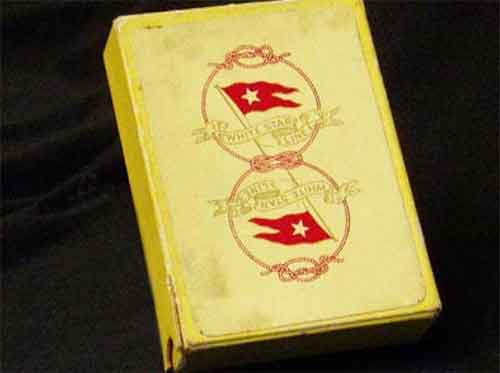 Here is part of a report based on an interview with a surviving passenger a day or so after the tragedy. “Mr. Chevre said that he was playing bridge in the smoking room when the collision with the iceberg happened. He pointed out that probably it was a submerged berg that the vessel struck, as he saw no sign of it afterwards, though the water was covered with floating ice. The vessel shivered and tilted and he heard the tremendous vibration caused by the screws revolving out of the water. He thought they had gone over a big wave and paid no attention to the shock for the moment. Indeed, it made no difference in the game of cards, which was continued until someone burst in with the news that the Titanic had struck a berg and was sinking. Even the members of his card party laughed and proceeded with the game. The first alarm was followed by several others, and then a general panic took place. Everybody in the smoking room rushed upstairs to be met by an officer of the ship who assured them that there was no cause for alarm and that they could return downstairs.” 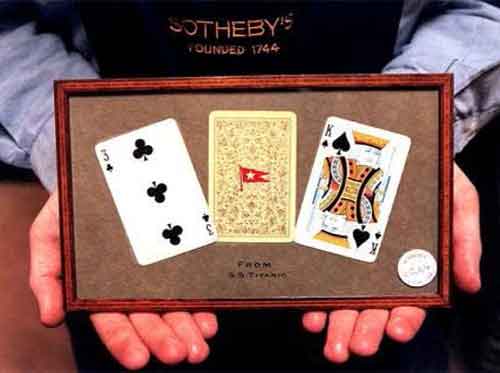 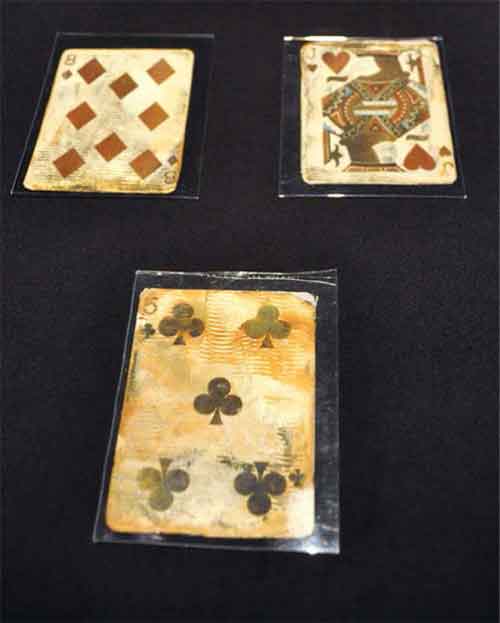 Playing cards in poor condition purportedly recovered from a salvage operation on display at the 'Titanic: The Artifact Exhibition' in Singapore circa 2011 (Source: Leone Fabre)

In another interview, one survivor, a barber who plied his trade crossing back and forth over the Atlantic more than 350 times, had this to report. “I had closed my shop and was taking a turn on the promenade. Looking through the windows I could see the passengers in the main saloon playing cards and reading. Suddenly, I was startled to hear the hoarse voice of a lookout command, Port your helm!"

Naturally, a steamship company of that caliber would provide playing cards for all their passengers to use. It would seem, however, that one traveler hadn’t realized this prior to departure and brought his own, as we can see from this small report. “As the centennial of the tragic sinking approaches, Titanic: The Artifact Exhibition invites guests to learn more about the recovered artifacts of the 'Ship of Dreams'. Soon to be sold at auction with almost 5,000 additional artifacts valued at $189 million, these American steamboat playing cards are from a pack of 52 found among the personal property of passenger Howard A. Irwin and can be found inside Luxor Hotel and Casino." 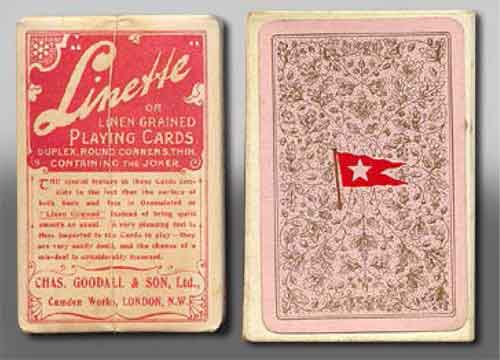 Box of 'Linette' Brand playing cards made for the White Star Lines.

The pictures you see are of cards and packs that, purportedly, came from passengers who had taken them off the ship, or were recovered in recent salvage operations.

The source of all the images in this article Tony Probst / TitanicCollector.com unless otherwise noted. Tom Dawson's article first appeared in CARD CULTURE (June 2015 Issue #7).

Lee Asher is the editor-in-chief of CARD CULTURE and the youngest President of the world's largest playing card collectors organization. Read more.

Educate yourself as much as possible about Jerry's Nugget Casino Playing Cards before spending real money on counterfeit cards. Read more.

Have you ever wondered when your playing cards were printed? How old are they? Read this brief informative article and learn how to date a deck of playing cards. Read more.

Constant innovation, the desire to improve the quality of their playing cards, and the exquisite attention to detail have made Fournier one of the world's leading card manufacturers. Lee Asher's 605s are designed to maintain their original form and may get handled for many hours without symptoms of wear or suffering any tears. Read more.